On 'Winchester' (a Very Brief Review)

I finally watched Winchester on Netflix and was at first prepared for the worst, given the reviews the movie received. But it didn't turn out as badly as I'd expected, which is a relief. I guess I'd give it a B- at best or a C at worst if I were to score it because it wasn't that terrible, though were elements that the movie really shouldn't have gone with. 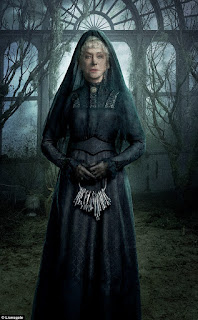 I do appreciate the fact that the writers took material from Sarah Winchester's life and gave it their own spin. The theme of loss and guilt are spot on and an excellent foundation to build a story on, especially obsession and the role of spiritualism in the woman's life.
True, they also Hollywood-ized the whole thing, but if we were going to dig into her experiences and stay true to them, I think it would've made for a better documentary and not a fictionalized movie about it. I'd have preferred the documentary, frankly, but we have what they gave us, so that's that.
The mansion is, naturally, the star of the show and is absolutely gorgeous, gorgeous, gorgeous. I've been to the Winchester Mystery House before and absolutely loved it, and the house is deservedly a significant character in the film. An embellishing touch here and there brought it to life, sure, and its beauty and creepiness are appropriately magnified and even celebrated (save for the bits in the final act).
What doesn't work and is really the worst part of the film is the niece and grandnephew subplot, which adds absolutely NOTHING to the story. At all. If anything, shrinking the character lineup to just Winchester and the doctor would have made the story work a lot better. But the addition of this (badly written) child and his (slightly more effectively written) mother really feels like unnecessary padding that goes nowhere.
Third Act showdowns between the living and the dead don't work, either, and it's disheartening that the writers opted to "beef up" the narrative with something like occult fireworks. Haunted house films have succeeded in the past without the inevitable head-to-head fist/gun fight in the final act, and readers of this blog already know that I'm a massive fan of quiet and atmospheric haunted house films that do a spectacular job ratcheting up the tension and the fear factor through subtler means.
And those same readers will expect me to support those claims by naming the same three films that manage exactly that: The Changeling (1980), The Others (2001), and El Orfanato (2007). I've yet to watch other haunted house films that attempt the same buildup of tension, and so far I've been out of luck. Hence my turning to reading instead since published fiction is at least more varied and more promising in that respect.
I also binged The Big Flower Fight on Netflix before watching Winchester, and I'll probably be yakking about it in another blog post. There are a few other films I watched during the earlier days of quarantine, and I'll try to blog about them as well (The Dallas Buyers Club, The Danish Girl, and Suffragette). I've yet to see The Great, which is offered through another streaming service as well as What We Do in the Shadows (the series, not the movie, which I already own) and Dead Still, which I'm a lot more excited about but, unfortunately, are also unavailable to me.
Maybe Netflix will manage to work a bit of magic and get those other companies to agree to their streaming terms. Hope springs eternal, anyway.
at July 08, 2020