Odds and Ends, Bits and Bobs, and 'Circus of Books' (Which I Loved)

So one thing I learned the past couple or so days is the gloriously coincidental birthdays of some great horror legends. In addition to Dracula being published on May 26, 1897, some big names in classic horror were born within a day of each other.

I've just crossed the 10K word mark for Agnes of Haywood Hall, and so far things are looking pretty good. I'm working to keep it as light as the first novel, which isn't a hard thing to do. I've yet to start writing the first chapter of Eidolon, but it's not as imperative to get going on that book than Agnes.

With all the insanity raging around us, I'm back to retreating to a single place on the 'net that's as far removed from larger social media sites. It's been very difficult navigating around justified collective rage over police brutality, racism, and every other ugliness that's part and parcel of being human but is getting exposed and amplified for everyone to see. It's a long overdue fallout, to be honest, and it's excruciating to watch, but as I've said, it's tragically justified.

For now, I'm trying to keep it together without losing sight of the bigger picture, but that means dumping a bunch of accounts I wasn't following but had put together under one list. Once everything blows over (if such a thing can even happen considering how institutionalized hate and bigotry have become), I'll put up that list again and add those accounts back.

In other news, I've also been considering adding to my monthly e-book sale so that each month has two e-books from my backlist up for sale instead of just one. I'll need to go back and restructure my 2020 calendar from June onward, which isn't a difficult thing to do. Come December, I might even have three books up for sale unless I start in November because that's actually the start of the holiday season. I'll be posting an updated calendar sometime this weekend in preparation for the second half of 2020. 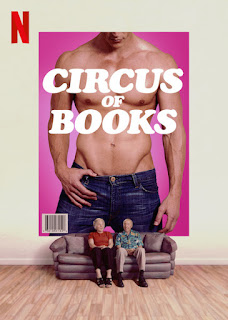 I said over at Twitter that the movie's a lot more complex than it looks, and it's got everything to do with the matriarch, whose POV pretty much stays front and center throughout. The way she manages to compartmentalize religion (she's a devout Jew), pornography, and especially the gay community is really astonishing. But it's a very good picture we end up seeing of her and her more liberal and laid-back husband (whom I'd love to have for an uncle or something) and their role as a straight couple neck-deep in issues that shaped LGBT history.

The following e-books are on sale for 99 cents each through the end of the month:
* Icarus In Flight
* Children of Hyacinth
For some non-blurb information on the books, go to this blog post.